Before the sun rises, I go down to kitchen to make coffee.

Grinding the coffee beans for opening my new day is a must.

Then, the fragrance of coffee

Brewing in coffee-maker awakens my brain.

Then, I return to Costa Rica

Into my cup from her big kettle in a beautiful jungle.

Life is pure, beautiful and lovely.

Send your poetry, essays, photos, artwork, or other creative material to publisher@koreanquarterly.org 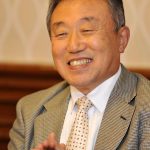 Yearn is a poet, writer, and commentator.

Choi is the author of "Introduction to Public Administration: Essays and Research Notes", "Readings in Public and Environmental Affairs", and "South Korea’s Environmental Policy and Management".

He read his poems at the U.S. Library of Congress as invited poet in 1994 and 2003 under the sponsorship of Poet Laureate and Scholars Program. His memoir, "Song of Myself: A Korean-American Life", was published in 2010 by Poetic Matrix Press.