I imagine your first piercing cry
as you entered this world
Your birth mother’s silenced
screams
bore down
fists clenched tight
Her outstretched arms
reached for you
Delight turned to panic
as the words of Confucianism
entangled her thoughts
How can I possibly keep him?

A boy with love
full of wonder
She exists in your being
Did my birth mother take care of me?
Holding space
inside the hard questions
I softly close my eyes
and breathe in
her sadness. 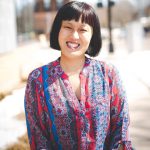 Heather Hauck was found in Daegu, South Korea, and was adopted when she was six months old. As an international transracial Korean adoptee and mother she’s mostly interested in exploring the intersections of adoption, motherhood, identity, and race. Her work has appeared in Visible Magazine, Children’s Home Society and Lutheran Social Services of Minnesota, and she was a participant in the 2019 Twin Cities Listen to Your Mother. She lives with her husband and son in Minneapolis, Minnesota.